Energy transformation is currently changing the economy in all European countries. In this process energy security, competitiveness of industries and climate protection solutions compete with each other. In addition this situation is framed by the European Green Deal to develop Europe to the first climate neutral continent until 2050.

Political solutions of the EU and it’s countries aim for reduce emissions by at least 55 percent until 2030 without changing any framework. In order to achieve this, energy efficiency, more use of renewable energy and increasing use of renewable electricity should come more into the focus. In addition, the European electricity markets should grow closer together and be made fit for the increas-ing proportion of fluctuating renewable energies across Europe. Greater integration of the energy system should also to be achieved and the European energy infrastructure should be modernized. However, this discussion deliberately does not touch on the issues or financial redistribution and the democratization of economy, which are essential for just transitions.

For the left parties in Europe should be clear: climate change needs also social changes. But this point of view faces lots of contradictions. The urgent need of fossil energy production contrasts with the fact that the expansion of renewable energies is not progressing fast enough. The energy change has probably to be bridged by modern gas-fired power plants. The differences and competition between “coal countries” like Poland or Hungary, countries like France with lots of nuclear power plants or Norway, which already gets 98 percent of its electricity from renewable sources will be a big challenge for the left strategic discussion. At the same time, the EU Commission’s attempt to label gas-fired power plants and as well nuclear power as green technology shows that the left-wing strategic debate not only has to overcome national differences, but also political resistance in Europe.

In order to resolve this contradictions and not forget the people, the left has to conduct this discussion as a discussion of industrial policy. Industrial production will be necessary for the transition of mobility and energy. But in order to initiate climate change, industry must not be dismantled but transformed into a sustainable industry. Additionally questions of redistribution and democratization must be actively discussed by the left forces. For this, the exchange with the climate movement has to be in the focus as well as that with the trade unions.

The European Left wants to rise this challenge. For this purpose a working group has been established: it consists of left-wing energy experts, comrades who know the political differences between the left parties very well, trade unionists, members of the EL, The Left, Transform!Europe, Rosa Luxemburg Foundation and TUED.

You can find here the working group’s first policy paper, published in occasion of the European Forum 2022, in Athens on 21-23 October 2022. 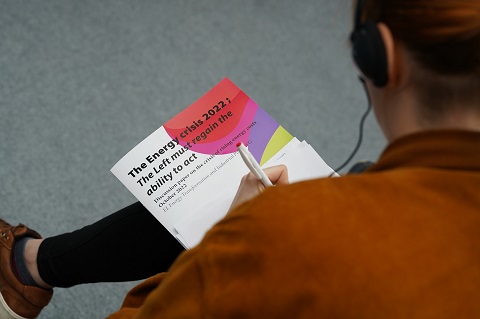