Break with the neoliberal past: This is not the Union that we want! 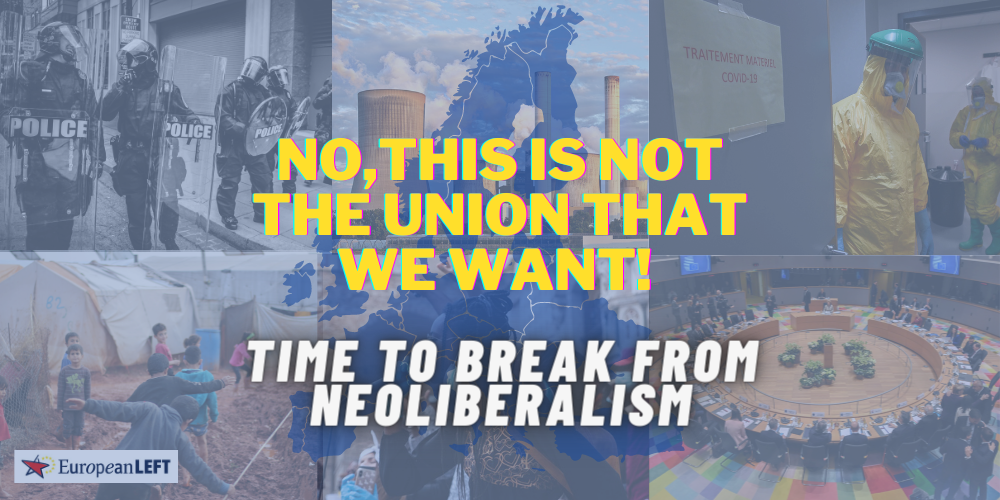 Ursula von der Leyen, President of the European Commission, delivered her second State of the Union address today at the European Parliament’s chamber in Strasbourg.

A crucial topic that directly involves each European citizen, the reflection of the status of the European Union can not simply remain a communication gimmick and tradition. On behalf of the Party of the European Left, its President Heinz Bierbaum comments:

“For nearly 15 years, we have been facing financial, social, and political turmoil rooted in a model of development which is socially, economically and ecologically unjust and unsustainable. At the same time, the Covid-19 pandemic has deepened existing inequalities and highlighted the failures of neoliberalism and austerity.

Ursula von der Leyen declared success with the EU’s vaccine strategy after an agonizing year of supply challenges and a battle with AstraZeneca claiming that the EU has “delivered”. Although the Council promised to share the vaccines with the rest of the world to the best of their ability, wealthy nations still have a surplus of unwanted doses of the COVID-19 vaccine while people in low-income countries are far from receiving their first shot. “Unless we lift the patents and share the technology, vaccines will only be produced for 2% of the world’s population. We therefore endorse the Right2Cure – the European Citizens’ Initiative “No profit on pandemic”, a campaign that calls for public and accessible vaccines”, Bierbaum adds.

“From the viewpoint of the Left, we are not satisfied or convinced with the State of the Union speech, which risks establishing itself as a defence of neoliberal policies and the austerity model. This is evident by the fact that von der Leyen did pay any tribute to the thousands of workers that lost their jobs during the pandemic or to the exacerbated inequality that resulted from the emergency measures, which we observe with great dismay. We reiterate our belief that austerity must be addressed with solidarity. Since the start of the crisis, the European Left has advocated for the creation of a European Health Fund backed by the European Central Bank. We propose a rupture with the past, rejecting austerity and all policies that obstruct the development of a social Europe.

The President of the Commission talked about “a long history in building and protecting peace” and underlined the need for a European Defense Union, in which military interoperability and intelligence must be improved. This essentially translates to increased militarisation, which brings nothing more than war. To the global scope of the problem, there is no other option but international solidarity: now is the moment for a new disarmament program and a détente policy. Military spending should be drastically cut in favour of healthcare and social necessities. European unity is demonstrated through the strengthening of common civilian structures rather than through armed methods that nurture war”.